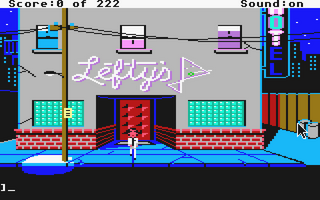 I don't know how many of you still remember this screen. Yeah man this was "the game!".Larry the very first one. Some of us may still remember when this was played on CGA/EGA video cards, with 4 or 16 colors. Way back around 1987 to 1991. I first played it with a group of friends back in school , maybe or 91. This was amazing then. An interactive character, who was out hunting for girls. Was kinda a big thing back then, something you really talked about. And if I asked for the password; how many of you still remember it.... :P
Anyway this was a good inspiration to some people too. I remember some guys working on a similar small scale game. Which was built for the O'Level computer project; using the BBC Micro's. Don't really remember who the gang was. It was done using sprite animations, at a very simple level. Anyway those were good old time; when everything new you see inspired and fascinated you.

So where are we moving now? I guess its a lot changed; the internet has come a long way; and game development has improved so much. I guess the next level is more to do with online gaming. Things worth looking at are new games like Naughty America's which is a blend of The Sims and Yahoo Personals.
Posted by chopey at 2:31 PM 4 comments

Here is the definition from wikipedia. "Vaporware (in British English: Vapourware) is software or hardware which is announced by a developer well in advance of release, but which then fails to emerge, either with or without a protracted development cycle. The term implies unwarranted optimism, or sometimes even deception; that is, it implies that the announcer knows that product development is in too early a stage to support responsible statements about its completion date, feature set, or even feasibility."

So what's so bad about it? NOTHING! Infect one of the longest-running vaporware project known as project xanadu is one of the basis of the world wide web. Although Tim Berners-Lee is to be credited for the w3 some of the technologies (The hypertext mark-up language) used were results of long running vaporware projects. Example; HyperMedia : is a term used for hypertext which is not constrained to be text (it can include graphics, video and sound). W3 is a wide-area hypermedia information retrieval initiative aiming to give universal access to a large universe of documents. The term hypermedia was coined by Ted Nelson around 1965. Project Xanadu is the Original Hypertext Project which was started by Ted Nelson.
Posted by chopey at 1:51 AM 0 comments

tracking technology on the Internet

netcraft.com has been around since the very early days of internet. Not many of us use it as individuals? Or do we? I was first introduced to netcraf back in 1996, by my good friend Ishan (where are u dude now). After a long time, I went into the site. Still to find the good old looks and information. Some of the public services which has been long provided by them include, tools to see what web server the site is running on. Example google. And other stats like up times and performances. Its some times very useful to know these kinda information. Loads of new tools or applications is out there to do the same now, but I still find netcraft to be more reliable and something worth to look and use. Some examples include web server surveys

I've never tried it before , but I was told that Google Earth did run on wine under Linux. Never got the chance to test it. Tonight I downloaded the new version which is version 4 and tested it on Linux. It works fine, the thing about this is its a native release, not running through wine. Finally I can too :) 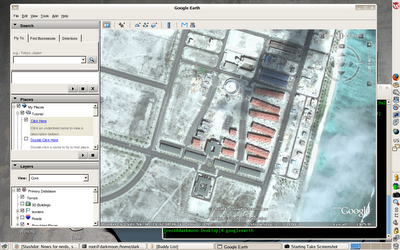 The screen shot showing, the little place on earth where I live and work
Posted by chopey at 2:58 AM 1 comments

Slashdot gets a face lift

A lot of us have been slashdotting for a few years now. Its been one of the best source of news for most of us. Anyway I think the new face lift is cool. From what I've read it seems the new looks is just the magic of CSS. Its very much been the same looks for years now; except on the 1st of April 2006. That was a good one.
Posted by chopey at 1:42 AM 0 comments

The last post I made was using my mobile phone. What's the big deal? Well its not using GPRS, its just through a simple SMS. But it did not work as I expected. It did not handle the compressed sms(multipart). But anyway its a start, I just need to fix some stuff.

How this really works is using a simple sms to email gateway that I am developing. Its not really fully done yet. Anyway Its functional. I got the idea of giving it a try after coming across a project called mPost. Blogger also has the functionality to post via email, so I am taking advantage of that.
Posted by chopey at 2:44 AM 0 comments

this is a blog post i am making via sms via email to blogger. Jee long method ey. This works through a sms to email ga

I am not much of a web guy at all, but lately I had no choice. Had to work on a small project and I was forced to look into a good CMS. I went through a lot of them. Mostly php based ones, which are very famous and strongly suggested by my fellow friends. They were all cool.

But then I got to plone. Plone is a open source cms built on top of zope. I think this is the best CMS I have seen thus far. It is more then just a simple CMS, there is a hell lot more to it then being a simple CMS. I also liked the fact that I can develop stuff for it, more like addons, using python and take advantage of zope application framework. I had to less concentrate on the presentation layer and could do more on the business logic of the stuff I worked on. I really enjoyed the last 3 months I spend working with zope and plone.

Also it is worth to note that companies like Lufthansa, Nokia, eBay and also Nasa have adopted plone on various levels. I think even Ubuntu is using plone on their web site.
Posted by chopey at 8:10 PM 2 comments

Been a while since I blogged now. Anyway Just came across this news while reading through digg. Thought this is something worth to be noted. "Mobile phone companies join forces on Linux"....
Posted by chopey at 12:35 AM 0 comments